It all happened by accident... (Vices always do, don't they?) Dr. Kim was buying a sound booth from an elderly doctor friend. 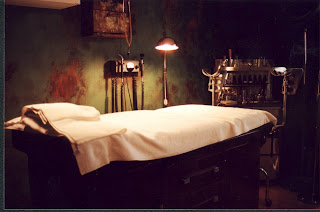 When I arrived at his office to pick up the booth, he gave me a lot of the big, basic pieces. The vintage medical pieces were his and his father's (who was also a physician - and was, in fact, a patient of Sigmund Freud!) Almost everything works, the otoscopes light up, and the rolling cart has a working suction pump. 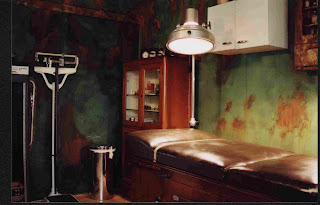 My students and friends found out I had the 'office' and started to contribute a lot of the other pieces including the stainless bedpans, old books, and signs. One friend just donated a (non-functional) X-Ray machine just last year. Who knew there was so much old medical stuff out there?! 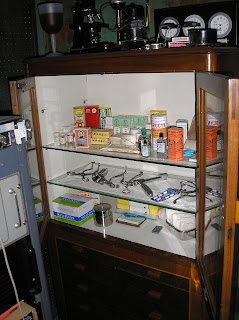 The wooden medicine cabinet has a lot of patent/chinese medicines and cures donated by friends.

While I wasn't sure I wanted to know, but I asked the good doctor what he did in this lab.

It doesn't really have a practical application now, although I did use it as a 'lab' for doing makeup and visual F/X for a while; It's pretty much just an "art installation" at this point (I'm sorry to say: I'm not really a mad scientist...) although there will be a film being shot in it later this year; and it's been a set for various other shoots in the past. 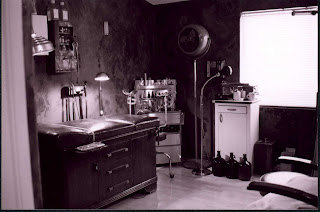 He also had some advice (he is a professional F/X person, after all) on getting some of these effects in your own lab/workshop/home:

I would describe the paint as: "an industrial green, that was sunk with the Titanic, and then recovered." The running rust on the walls was done by daubing brown on the green base, and then spraying lightly with water so the brown paint would run down. As I add the wall mount items, I position them to match the position of the stains.

The frames of the windows and door were painted with a metallic base and then layered with an oxidizer used to create real rust. The rusty medicine cabinet was actually a new galvanized piece from Ikea, also sprayed with the oxidizer to create the rust. 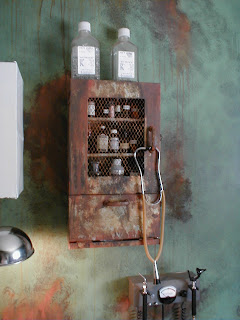 Update: Dr. Kim sent along a panoramic view for our enjoyment. (Click to get a bigger version...)

From left to right you can see: my (all too modern) computer monitor; the vintage floor-standing medicine cabinet (filled with Asian cure-alls); the victims' 'table-of-doom'; the 'rusty' medicine cabinet; otoscope; the rolling 'suction' cabinet; vintage "Vornado" fan; phone; hydraulic chair; radium storage (glows green in the dark!); antique books and bedpan/urinal set (above); and above the clock, you can see a tiny picture of the two original doctors, as well as a framed photographic diptych of Dr. Freud.