So I read about this shop called Brown in Domino magazine, and I thought "Hmm, it sounds like it could be steampunk." Since I was in Houston recently, I stopped by (twice, actually, since they didn't have hours on their website).

Their website describes their stock as lighting, furniture, industrial, didactic, and curiosities. There was a lot of lighting. It was very nice and very expensive, and not "raw" enough for me. There was not much industrial and the "didactic" (vintage teaching posters, mostly) leaned strong towards the biological.

That being said, there was one very steampunk find: 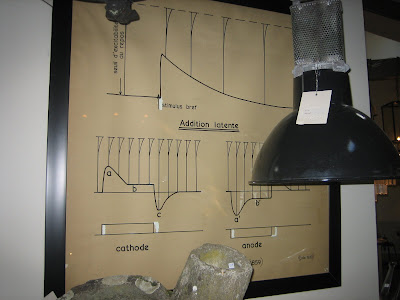 A French teaching poster with a voltage graph. I'd guess from around the 1930s?

Ben pointed out that for it's price of more than a thousand dollars, you could print many large format posters from images in old Scientific Americans. (More about that shortly.)

So -- if you happen to be in Houston Brown might be a good shop to stop by, but expect a store that has a little bit of steampunk tucked away in the corners instead of anything more substantial.
Posted by Sara at 7:17 AM

Anonymous said...
This comment has been removed by a blog administrator.
February 6, 2009 at 8:59 PM