Mr. Brumfield and I attended a very charming airship party this weekend. Her Majesty's Ship Rapture was full of colorful characters -- airship pirates (allowed on, I understand, because they were the only ones with a map to our intended destination), mad scientists, automata, doctors, colonels, engineers, ladies and "ladies" -- we had a lovely time. Since I imbibed a bit too much of their patented elixir, I forgot to get any "daguerreotypes" of the decor but the Baron has been generous enough to share one of his with me. 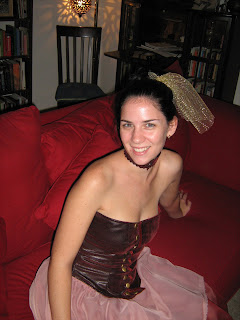 This is the first class cabin (if you can't tell from the occupant -- a beautiful dancing automaton) which was very luxurious if a bit risque with it's red upholstery, a hookah pipe (out of sight), a writing desk, bookshelves, and a lamp that added a touch of the fantastic to the whole proceedings.

The crew quarters was more rough, with salvaged equipment that led one to doubt the stability of the engines, and science experiments that glowed, squirmed, and made one quite tipsy.

Mr. Brumfield and I went as engineers with the railroad in the American West -- saved us from having to maintain English accents, you know -- and allowed us to sneak on board with our weapons (side rule, level, pocket scale, stopwatch, and many pocket watches) which the lax security decided did not qualify as weapons of mass destruction. (Silly them.)

Our thanks to the sinister Doc Sinister, the Lovely Mdme Rosamund, and Lady Lucrezia of the wonderfully cast resin trilobite for a lovely event.
Posted by Sara at 9:48 AM

Was this in Austin, TX? I'm there now and want to know about others interested in the Steampunk aesthetic.