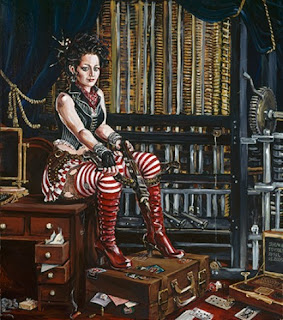 I am extremely behind the times on this, but I hope all of my Bay Area readers spent some time at the Steampunk Salon at the Maker Faire earlier this month. One of the things on display there was this painting by artist Suzanne Rachel Forbes.

Suzanne is selling prints of the painting as a fundraiser for the Electronic Frontier Foundation, which you do support, don't you?

The painting is full of objects and symbols of the computer era -- an incredible amount of detail and thought:

She is defending early implements of the computer revolution, Jacquard punch cards and IBM cards, a CDV of Ada Byron, and Charles Babbage’s Difference Engine No. 2. An apple core represents Turing, eaten up by the intolerance of his era.

Also prominently displayed are some wonderful modern creations- The Steampunk Laptop by Datamancer and the Steampunk Flatpanel and Keyboard by Jake Von Slatt- who were kind enough to allow me use their work in the painting. The packet-sniffing rat under the desk is a nod to the EFF’s most recent victory; the EFF logo appears among the luggage stickers on the trunk.

I'm not quite sure how effective an antique Chinese crossbow is at defense in the virtual world, but I like the style.
Posted by Sara at 7:54 AM

Email ThisBlogThis!Share to TwitterShare to FacebookShare to Pinterest
Labels: art

thants an really nice article.. its really good.. regards..
i work on generic viagra online , such information are really hard to get in my work.. i like the way you have worked in this blog.. thanks..