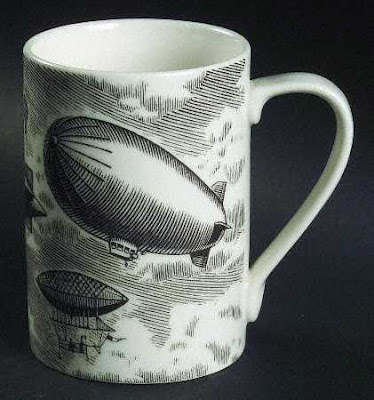 You may think I write this blog to entertain and inform all of you -- or because of the accolades that come with being the world's foremost authority on steampunk home decor (cough _none_ cough) -- when really, I write it for my own pleasure and research into how I'd like my home to be. (Your feedback, ideas, and compliments don't hurt, however!) Take for instance, this post I wrote over two years ago, on Steampunk Furnishings that don't exist but should, suggesting a line of plates with steampunk gadgets or machines on them. Thaumata was browsing the archives (and that far back shows some real dedication), and commented thus: 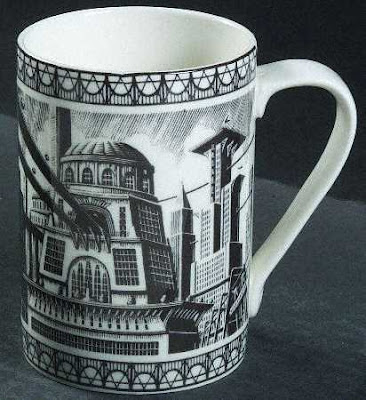 I have a crazy china set that I think you'd like. It was made by a company called 222 fifth and the series is called Slice of Life. Each plate, salad plate and mug has a different illustration on them of any number of oddities. Unfortunately, they don't make them anymore so it can be kind of hard to get your hands on them. There was an airship mug I never did get my hands on. 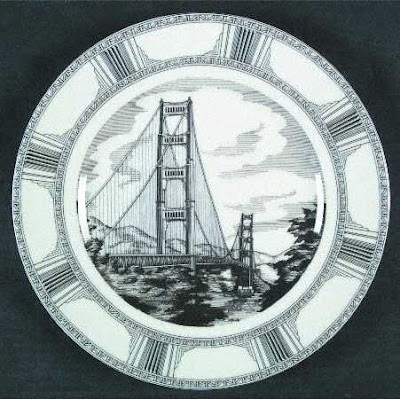 I frequently found them still at places like Marshall's and the like, being sold off from the expensive department stores who were clearing them out. 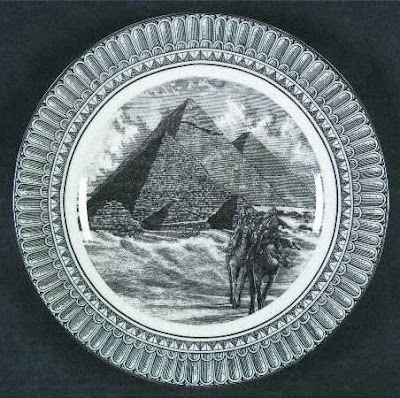 I always envision a red, black and white kitchen that has them on prominent display. 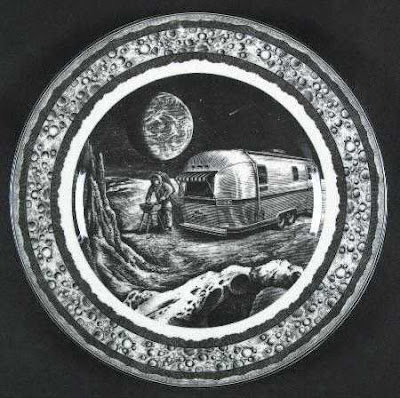 Aren't they wonderful? From the pyramids to a futuristic city, with an airsteam on the moon in between? 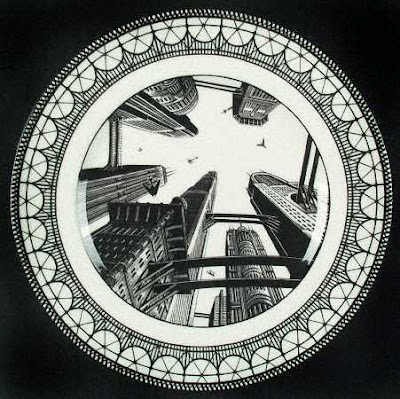 find 222 FIFTH SLICE OF LIFE at Replacements, Ltd
Posted by Sara at 1:19 PM

Those are awesome! I want a set!

Yay! I'm glad you enjoyed them. I had a feeling you might.

Terrific dishes! And I was just thinking about replacing some green plates on the kitchen wall with black and white, hmm....Thanks, Sara and Thaumata!

Beautimous! I'll definitely be acquiring some of these, especially the moon plate. Found them on Replacements:

It figures that they are no longer available. Its a shame they were not marketed at Steampunk enthusiasts, they could have made more money and we'd have dishes.

Holy steampunkin' HELL - those are AMAZING!!!!

These are totally awesome! I think what I like best is that it triggers the imagination, just like all my other favorite stuff on this blog. I know as a "slice of life" they are describing different scenes, but I like to imagine a world where all the scenes come from the same world-- both the pyramids AND the airstream on the moon (probably my favorite plate shown). Thanks also for the link to Replacements.com; it'll be hard NOT to buy some now...

Wow, this is a really cool blog, just stumbled across it whilst looking for old edison-bulb style filament lamps. I really like the asthetic...I always associated 'steampunk' with just people wearing goggles, but as far as the home goes it seems to be EXACTLY my taste! The plate with the futuristic city seems to sum up my style perfectly, science/technology with that old victorian charm and attention to details...ahhh makes me feel right at home. Thanks for bringing all this stuff together in one place!

Well I certainly consider you the world's foremost authority on steampunk home decor! I am very pleased to have found your blog recently, your efforts are very much appreciated.

Wonderful china! Sometimes you can find unusual decorated china similar to this at First Tuesdays -- sometimes classic European architecture scenes, or Victorian travel type motifs. Not usually sold in sets, but often enough on the hooks and shelves to get a bunch of mugs and cake plates for tea or coffee company. TJ Maxx and the like also have similar china patterns going through their inventory, and if you're diligent in checking often you can catch some nice ones when they arrive in stock.

P.S. thanks Catclaw for sharing the Replacements info!

I didn't know there were other designs! I found a really cool airship plate at a local Marshall's at Christmas time last year (2010), but that was the only piece in the whole store. I know, because I looked on every shelf for more ... I'll have to look up the pattern and see if I can get at least another plate and some mugs for my Tea & Picnic Field Kit that I'm putting together.