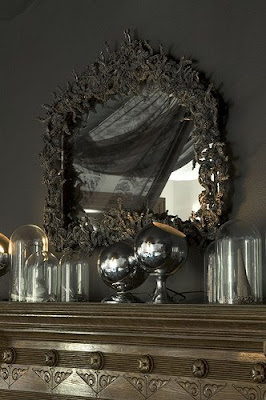 Kevin Derrick, the Project Coordinator for M.O.N.A.'s drawing room in the previous post, was so kind as to answer a couple of my questions about the room, it's contents, and the design.

What is the mirror frame made of?
The mirror is oxidized copper tentacles, made by processing wax forms via an electroform tank. The copper solution "sticks" to the specially-coated wax and when complete, all you need do is torch the wax away. Pretty cool, huh?
How did you make the chandelier?
The chandelier was made by Rebecca Pulver, who brings a wealth of talent to our group. She's the protege of Warren Muller (from bahdeebahdu) and also created the fire screen and electric plate covers too. The chandeliers contain the cast-off parts of other light fixtures wrapped around a wire mesh frame. The real difficult challenge was hanging the 150 pound structure from the vaulted slat ceiling. The genius of using steel chains at the top made it appear to be restrained rather than suspended. 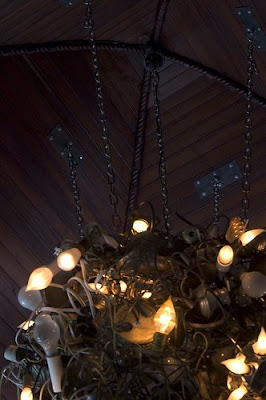 Why all the stuff on skinny sticks? :)
Mass-produced porcelain came into the hands of the middle-class for the first time during the Victorian era and so I thought should be included in the room. We used vintage/antique porcelain and silver tableware on thin steel rods which references (maybe a bit too heavily as I'm writing it) plate spinning as a circus act, a huge pastime for families in that era. Too much?
The letters on the walls -- do they say or mean anything?
The letters are random except for spelling out the names of team members in key points throughout the room (Geoff, Emily, Robert, Schuyler, Kevin, Michael, Rebecca and Linda.)
How did you light the glassware on the corner table? (Showing off
clear glassware is a challenge...)
We'll keep that one a secret... 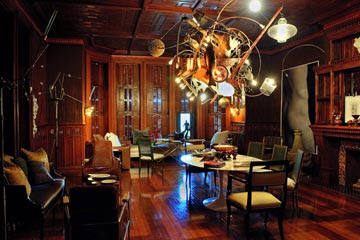 The Dining Room at Dog Haus (photo courtesy of Kevin E. McPherson at AroundMainline.com)
How did you pull this off? It's a bit eccentric for the more
"mainline" style of the house (although props to the dining room...)
Props to the dining room indeed! That was created by my mentor, RJ Thornburg of bahdeebahdu. He coined the name "Made On North American" and is responsible for our existence in too many ways to name.... But back to your question- The PSPCA organizers of the Dog Haus were exceedingly gracious in allowing us carte blanche to create a memorable space in the home. While the owner was unsure of our direction and ability to pull it off (though we never had a doubt, haha), ultimately she was happy with the result as well. The other designers in the showhouse had some provocative elements too, though they were invariably more subtle than ours. Ultimately, our strategy was for people to talk about us first and then sort out if they agreed with our ideas or not... The best part is that the more attention the house receives, the better it is for the mission (and coffers) of the *extremely important* SPCA charity organization.