You liked the floor of the Standard enough that I have to do a follow up post... 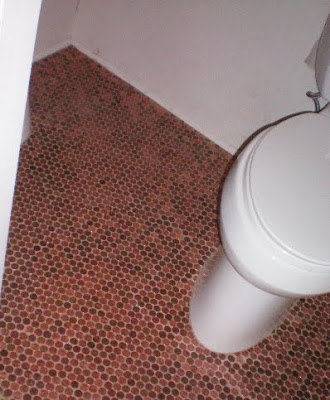 Amanda pointed out this Apartment Therapy post with instruction on how to do it yourself. This particular floor used about $35 worth of pennies -- cheap from a materials point of view, if not for labor. Scroll down to a long comment by "teeze" for the how-to.

And Cheetah Velour sent this from the New York Times of a bar covered completely in pennies.
Posted by Sara at 6:58 AM

Nice post even if using money for anything other than what it's intended purpose is happens to be very very illegal (assuming we're dealing with United States Currency), on that note I felt I should share this:

"Whoever fraudulently alters, defaces, mutilates, impairs, diminishes,
falsifies, scales, or lightens any of the coins coined at the mints of
the United States, or any foreign coins which are by law made current
or are in actual use or circulation as money within the United States;
or whoever fraudulently possesses, passes, utters, publishes, or
sells, or attempts to pass, utter, publish, or sell, or brings into
the United States, any such coin, knowing the same to be altered,
defaced, mutilated, impaired, diminished, falsified, scaled, or
lightened? Shall be fined under this title or imprisoned not more than
five years, or both."


If you choose to follow the example of this individual you do so at the risk of legal action being taken against you by the United States Government, by embedding currency in such materials as flooring or polyurethane table tops or similar materials I believe you are 'impairing' the currency (removing it from circulation, which definitely has an impact on the economy). The more money that's removed from circulation through illegal means such as this the more money the government has to mint to replace it (which costs money to do when you consider they have to pay the workers that produce it and the materials and overhead involved).

This and the copper kitchen remind me of the 1950s copper-clad Chambers stove we used to have. Cooked like a dream. We left it behind when we moved, but it looked like this:

Interesting post, but the key for the use of pennies is the "intent of fraud" (the first line of section 331), or as stated here, in a 1980 response to a pressed penny collector from the Department of the Treasury...

*As you are already aware, a federal statute in the criminal code of the United States (18 U.S.C. 331), indeed makes it illegal if one "fraudulently alters, defaces, mutilates, impairs, diminishes, falsifies, scales or lightens" any U.S. coin. However, being a criminal statute, a fraudulent intent is required for violation. Thus, the mere act of compressing coins into souvenirs is not illegal, without other factors being present.*

So, while one might interpret as a violation of federal law, I would say the Feds don't really care, and would argue that the ATF or Treasury won't be knocking down your door, if one uses pennies for decoration. The intent to defraud simply isn't there, if the pennies are used for decorative purposes.
As such, I'd say go down to the bank, pull out $50 in pennies, and have at it!

I love this floor, but how do you clean it? lol.

Actually Dr. Rafael Fabre it still boils down to defacement of federal currency which is illegal no matter how you look at it, from a legal standpoint the money does not technically belong to any one individual it merely represents a form of 'promisory note' that when turned in is/was supposed to entitle the bearer to exchange it for an equivalent amount of gold. Whether the intent is fraud or not does not enter into it. Read the following for verification which sites the appropriate legal statutes: http://answers.google.com/answers/threadview?id=426715

in that case the original question is asking if it is illegal "To compose a sculpture out of US coins" siting that small holes are drilled for fabrication, the quote I posted earlier specifically states 'Whoever mutilates, cuts, defaces, disfigures, or perforates, or unites or CEMENTS together' cementing in this instance I believe includes gluing them to a surface such that they are unable to be spent the way they were intended to be. Pay particular attention to the phrase 'or does any other thing to any bank bill,
draft, note, or other evidence of debt issued by any national banking
association, or Federal Reserve bank, or the Federal Reserve System,
with intent to render such bank bill, draft, note, or other evidence
of debt unfit to be REISSUED', and yes coins do indeed qualify as 'evidence of debt'.

So, Aeronya Arai, have you thought of the fact that these pennies may have been removed from circulation legally? Therefor rendering it legal to "deface", or "enhance" or "cut" or whatever the definition you wish to use which is just modification.

If they had been removed from circulation they would have been destroyed, as that is what the government does with currency that has been removed from circulation, they don't give it out to people to use for crafts and whatnot because there is no easy way to mark them as having been removed from circulation to prevent people from using them as currency. However it is possible to obtain for example a sheet of uncut bills and use them for whatever you wish as those had not been placed into circulation yet and as such are not technically currency. However I don't believe the federal reserve has any method of distributing coins in the same way owing to the way in which they are manufactured (I may be wrong on this though, if so then by all means feel free to post a link to show me I am). As to the individual that mentioned that section 331 dealt with fraud, you are correct on that point that section does apply to fraud, however section 333 applies whether the intent is fraud or not, as such persons using currency in the manner depicted in this article are still in violation of Title 18 Part I Chapter 17 Section 333 of United States Code.

Feel free to contact the Federal Reserve if you don't believe me: http://www.federalreserve.gov

Has anyone ever considered those souveneir machines that smush your penny and stamp it with an imprint of various places you've visited? I'm pretty sure if "modifying" pennies in this manner were illegal, the feds would be all over that too! But they're not. In fact, you can get those souveneir pennies at places like Mt Rushmore, the Alamo in Texas and right here in Philadelphia at many historic sites. All places you would think the feds would notice, seeing as they are national landmarks.

So, in conclusion, i'm pretty sure this is a legal use for currency.

I have wanted a floor like this since I was 8, I LOVE it!!! Have been trying to figure out how to do it successfully ever since. I like to think of it as "preserving" the pennies, like when you buy coins in little plastic boxes, so that they have not been touched by human hands etc. they are still real coins and I guess if you bust open the box you can spend them even though people pay 10x their worth to get them in the box and then NEVER spend them. Also I would want to use some really old ones that I would be "hoarding" anyway. I once had a shirt I glued quarters to the buttons, when I was tired of it I popped the quarters off and spent them.

One little problem tho; Pennies are NOT Legal Tender.....

Quit trying to dump on this cool project- not only do you not know what you're talking about, you have no appreciation of REAL work.

cazin678, coins are in fact considered to be legal tender (pennies do in fact happen to be coins too!!) and defacement of such is specifically covered under United States Code TITLE 18 PART I CHAPTER 17 Section 331. Mutilation, diminution, and falsification of coins.

Check your facts before you say they aren't legal tender next time.

I site the following FAQ entry copied directly from the US Treasury website (http://www.ustreas.gov/education/faq/currency/legal-tender.shtml#q1):

Question: I thought that United States currency was legal tender for all debts. Some businesses or governmental agencies say that they will only accept checks, money orders or credit cards as payment, and others will only accept currency notes in denominations of $20 or smaller. Isn't this illegal?

Answer: The pertinent portion of law that applies to your question is the Coinage Act of 1965, specifically Section 31 U.S.C. 5103, entitled "Legal tender," which states: "United States coins and currency (including Federal reserve notes and circulating notes of Federal reserve banks and national banks) are legal tender for all debts, public charges, taxes, and dues."

... I know it's probably not terribly relevant, but the legality of the issue aside....

I don't think that the police will be knocking on our doors for using pennies to make bathroom floors. Maybe... MAYBE if we used a million dollars in pennies, or even a thousand... but since I know bars that are plastered with dollars signed by people as reminders of their visit, or taverns covered in silver dollars as decoration....

The legal points are valid, as far as I can see. However, I don't think it'll really come into play for decorating our little homes with pennies. If hundreds of dollars can go missing in the form of pressed pennies, stapled or folded dollars, or shellacked silver coin countertops, fifty bucks of pennies in my dining room won't be an issue.

You're right on the legal stuff, though, as far as I can see. It is, technically, illegal.

But really, do we want these comments to be sidetracked by lots of legal cut and paste? Isn't this a place to celebrate creativity and individuality? To reuse something and make it this awesome, props to the inventive lady or gentleman who started this!

Let us not forget the real purpose of this blog, these comments, and our entire lifestyle- to celebrate ingenuity, creativity, and a certain flair for the slightly eccentric at best and the definitively rebellious at worst!

OMG
I'm so making this one day.

I think this floor is breathtakingly beautiful!! I think I just found the tile for my bathroom remodel. Now to find out how exactly she got them down so pretty. :)