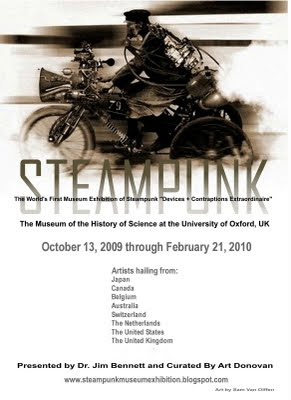 Art Donovan is at it again -- no, not a new steampunk light, but another Steampunk Exhibit. This one is at Oxford, at the Museum of the History of Science, and is happening October 13th through February 21, 2010.

From the press release:
This exhibition marks the very first time that the new genre of Steampunk art is to be featured in a major museum. Located in the original Oxford Ashmolean building (the oldest museum building in the Western World), the MHS houses the most comprehensive collection of important, historic scientific objects in the academic world.

For this special museum exhibition, Mr. Donovan brings together the twelve most world-renown artists of the Steampunk genre-representing The United States, The United Kingdom, Japan, the Netherlands and Australia. These artists will be displaying never-before–seen sculptural art and inventions inspired by the evocative creations of the historic Victorian scientists and authors. Many works in this show were created exclusively for this special exhibition and it is arguably the most ambitious collection of Steampunk Art assembled in one venue.

The Museum Director, Dr. Jim Bennett states: “The Museum of the History of Science in Oxford is delighted to be hosting the Steampunk exhibition. We have many of the kinds of object that inspire the Steampunk artists and excite the Steampunk enthusiasts of today, so it is exciting to see characteristics and qualities of the original designs reformed into objects for living in the 21st century.”

What is is going to include? Many, many of the makers and creators of our quirky little world, from all around the world... it's a truly impressive list.

So -- if you are in the vicinity, definitely go see it. If you aren't in the vicinity -- well, I'd try to get yourself there--you've got four months to make your travel arrangements.

Win it! Art was kind enough to send me the last two t-shirts from the first Steampunk Exhibit (sizes M & L). Tell me your favorite steampunk artist (part of the exhibit or not) and which one you'd prefer, and I'll randomly pick a winner for each size on Saturday morning.
Posted by Sara at 5:18 AM

Fave artist = Tom Banwell (for the moment, anyway). Love those rayguns! But all the artists in the show are definitely among the best. (Tshirt size = medium).

Yay! I'm going to this in two weeks time! (Researching for my SP kids book) Favourite artist (until I see the real things maybe) is Datamancer (size Large)

Datamancer is definitely a favorite! I feel my imagination firing on extra cylinders while looking at his work. *wipes away the drool after looking at pics of his laptops* (tshirt size - M)

Hello There,
I have never seen a site like this. It's awesome, and the shirt that's for sale today at riptapparel.com is a perfect match. Just see for yourself and tell me I'm wrong.

I am new to your blog as of today, and I was just telling someone it's my new favorite thing to read. :) Thanks for all the great pictures and ideas. Really good stuff!

Vianney Halter is my fave. Those time pieces are to die for. (M)

Thanks to All for your enthusiasm.
The artist's work IN PERSON is absolutely breath-taking! Photography, no matter how well done, doesn't even compare to the artistry and precision of their works.

Each artist's work is delightful! I'll have to choose Thomas D. Willeford, as I'm an aspiring costumer and there are some to-die-for corsets and other pieces. I don't think a trip to Oxford is in the cards for me, but coincidentally my dd, who is currently teaching in France, will be traveling there in a few weeks, so I sent this post to her and suggested she drop in. If the t-shirt giveaway is still on, I'm a Medium!

Cool blog. Wanted to let you and your readers know about the Steampunk Haunted House that Third Rail Projects is doing in NYC:

What other categories would be considered steampunk? Is there such a thing as magi-punk? I think I wrote an RPG setting that fits that description, and after stumbling upon the whole steampunk thing online, Im convinced.

It hit me today that a steampunk theme for at least part of our home might be a way for me to convince DH to let me decorate, and to even get him involved so I don't have to do all of the work. So I did a bunch of searches for variations on "home decor steampunk" and found your WONDERFUL blog!

I'm still looking through here, but can you either recommend some posts that may help be figure out how to do some steampunk decor on the cheap, or write an article on steampunk decor for the extremely frugal? We have literally no money to spend on home decorating, but are not afraid to get our hands dirty or try new things. However, I'm not sure where to find gears, interesting metal bits, or so on to work with. I'm already designing embroidered curtains in my head, but we have a lot of spaces that could really use bric-a-brac or other "clutter" to set the tone.

wow, I'm not looking for anything in particular and I stumble aponwhat looks to be like a great show.
good luck with everything

I saw this exhibition in my lunch hour yesterday. Astonishing stuff, something that has been creeping around in my psyche all my life and I never had a word for it before. Thank you for outriding the scene. I loved them all but my favourite has got to be Stephane's robodog so far although Art's lights are sublime techno art. I would have gone for Datamancer and the keyboards BUT he missed a trick and didn't use the Voynich alphabet on the keys. That has been a dream of mine for about 10 years. Keep the faith. I love this genre and will be kicking about the museum and the associated parties for the next month or two. I want to see a few steampunkers when they set fire to broad street in a couple of weeks.

T-shirt = medium by the way