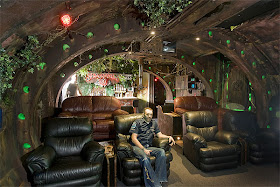 I don't know what it is, but media rooms and submarines seem to go together. Here's one from New Zealand, sent to me by Paul and featured in stuff.co.nz. 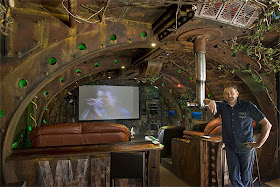 In the rusting interior of the submarine, which appears to have beached on a deserted island, Eyre has all the creature comforts reclining chairs, a three-metre big-screen TV and a top-notch surround-sound system.

Customwood has been sprayed with concrete and painted to resemble rusting steel beams, while plastic sheets have been melted to give the impression of bent steel ripped apart when the submarine hit an island. Speakers emit sonar and ocean sounds throughout the 12-metre by 5.5m room.